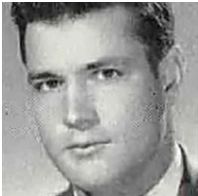 Mr. Soulé was born on Dec. 2, 1924, in Superior to Claude and Margaret (Henderson) Soulé, the youngest of six children, and raised in that small mining town before moving to Tucson to attend the University of Arizona. In Superior, he excelled at both basketball and football and often reminisced about playing football on gravel and what a treat it was to travel to other schools to play on grass. He also played basketball for UA and was recognized five years ago for being one of the oldest UA basketball players. He lived in Arizona his whole life and spent little time outside the state other than the two years he was enlisted in the Army during WWII.

He started his career in mining, sold insurance for the Mahoney O’Donnell Agency, was in residential home sales and worked in management at First Federal Savings before going on to be an independent appraiser in Casa Grande. He married Virginia L. "Ginna" Ellsworth in 1951. They had four girls, who often said he deserves a special star in heaven for living in a household with all women.

No service due to the pandemic. J. Warren Funeral Services in charge of arrangements.